Carl Ferdinand August Beckmann (1835-1908), known as August or Gus, learned the milling trade from his father in Germany. His first mill in the United States was in Juda, Wisconsin near Monroe. After operating the Juda mill from approximately 1860 to 1863, he moved to Hanover near Janesville to take over the mill there. In 1882 he moved 12 miles south to Newark to run his third and final mill, now known as the Beckman Mill.

The Beckmann family history has been traced back to the late 1700s in Germany to an area approximately 45 miles southwest of Hannover. At that time the name was spelled Beckmann with the double “n”. The villages in which various branches of the family resided included Wellentrup, Waddenhausen bei Lage, Pyrmont, Entrup, Lothe, and Niese. Others lived in Amelgatzen about 25 miles southwest of Hannover. Amelgatzen is near Hameln (Hamelin) of Pied Piper fame. Known surnames of those who married into the Beckmann family include Pieper, Schneehage, and Piewitz. Research suggests that several of the families were involved in milling. 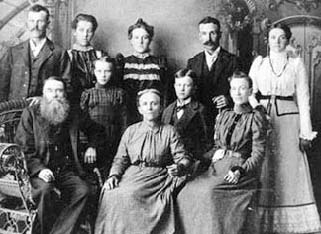 August’s father, Simon Carl (1805-1874), was the miller at Entrup, Germany from the late 1830s to 1857. In 1857, he moved with his family of seven from Entrup to Benkhausen about 40 miles to the southwest. Benkhausen is near the city of Korbach. Around 1859 son August emigrated to the United States with his sister Josephine (1845-1897). In 1868, Simon Carl also made the long journey to Wisconsin to reside in Hanover with his son and family. He died in 1874 and is buried in the Plymouth Cemetery near Hanover.

At the time of their move to the mill in Newark in 1882, the August and Catherine Beckmann family numbered seven. Their children were: George Henry (1866-1939), Charles August (1868-1916), Augusta Albertina Marguerite (18701960), Josephine Wilhelmina (1878-1978), and Katherine Emma (1881-1963). Those born at Newark included: Amelia Agnes (1884-1959), Charles William [baptized Carl Friedrich Wilhelm](1886-1966), and Gertrude Anna (1889-1981). Three children died in infancy. Genealogical research has revealed that while in Juda, WI, August was married twice. First to Dena Hoffmeister in 1860 and second to Catherine Ehrlinger of Hanover, WI in 1863. Very little is known about the first marriage. The Ehrlinger family came from Schornweisach, Germany northwest of Nürnberg.

On the Beckman fishing pier.