The building now known as the “Cooperage” (shown at right) served as the Beckman family’s home for 96 years (1882-1978). It was restored in 2003-2004 as a cooperage (for barrel making) to replicate its original 1840s use. A cooperage was needed at that time to supply barrels for the Goodhue distillery which was located where the mill is now. The distillery burned in 1853. When August Beckmann took over the operation of the mill in 1882, the cooperage was converted into a residence for his family. It remained so until Bessie Beckman moved to Beloit in 1978.

To show visitors what the building was like when the Beckmans were living there, a 1/12th scale model of it was constructed and donated to Friends of Beckman Mill. The model is now on display in the cooperage and was created by Steve Mann of Manitowoc, WI. 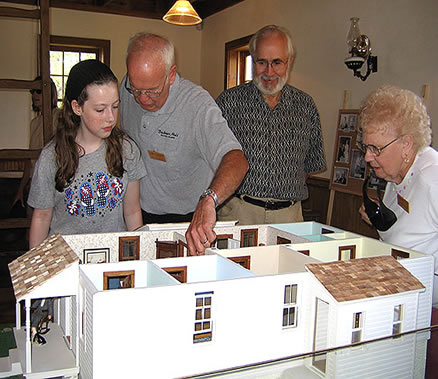