Early dams for streams of moderate size were constructed of various materials including logs, brush, rocks, boulders, and earth. Undoubtedly, the first dam on Coon Creek, believed to have been built in the early 1840s, was of made up of some or all of those materials. The earliest photograph of a wooden dam on the stream is from circa 1915. It shows what appears to be remnants of a boardwalk presumably used as a short cut to the other side.

By the early 1920s the wooden dam had deteriorated and was in need of replacement. Consequently, in 1924 Charlie and Henry Beckman with the aid of friends, relatives and neighbors built a new one out of concrete. Considering its 150-foot span and 8-foot height, the project must have been extremely challenging for a local work crew with minimal financial resources. However, their expertise proved to be of the highest level as their masterpiece lasted until the mid-1950s. Like its predecessor, Charlie and Henry’s new dam incorporated a board walk—a feature the Beckman family found handy accessing their dance hall on the west bank. The hall was built in 1932 and was in operation until the early 1950s.

Work on the replacement for the 1924 dam began in 1999. In the interest of authenticity it visually and dimensionally replicates its predecessor. It is V-shaped with a center buttress and measures 7 feet in height and spans 145 feet. The 20-month project required 5,718 man hours of labor and 438 cubic yards of concrete. All work was done by FBM volunteers without the aid of professional contractors.The dam’s unique design was the creation of Friends of Beckman Mill Project Coordinator Bob Fosler in consultation with Mead & Hunt Consulting Engineers of Madison.

The restored dam as it looks today. 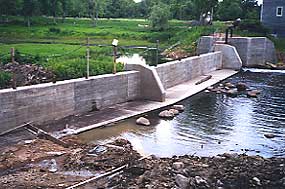