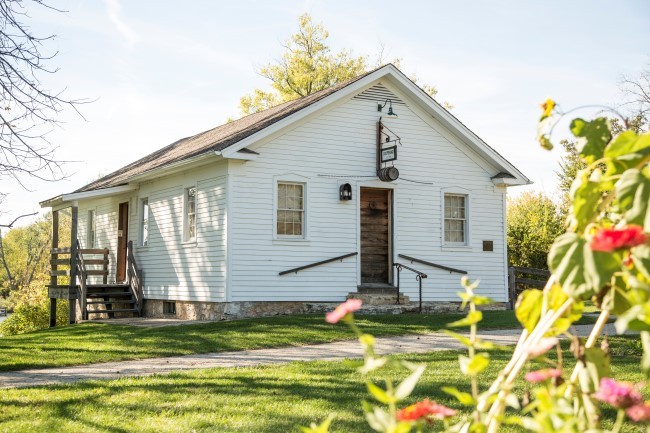 The Cooperage as it’s restored today.

Built in Rock County’s Newark Township in the late 1840s, the building that served as the Beckman family home from 1882 until 1978 is one of the oldest in the area. According to written records and oral histories, it was originally a cooperage for manufacturing wooden barrels for whiskey and other products. The barrels were needed for a nearby 1844 distillery and mill owned by Charles F. H. Goodhue. The distillery/mill was destroyed by fire in 1853.

A study of the 1850 industrial census for the area reveals that Goodhue’s Newark operation was very successful. Census records indicate that Goodhue had $10,000 invested in the distillery operation and employed an average of five males receiving collectively $100 a month. Raw materials used totaled 15,000 barrels of corn, 2,000 barrels of rye, 1,500 barrels of barley, and 300 cords of wood. Whiskey production was an impressive 1,500 barrels. In an 1850 Federal population census for Newark Township, it was learned that the distiller was 42 year-old Marion Parker originally of Connecticut. The cooper was Silas Keltner, age 35, of Tennessee. 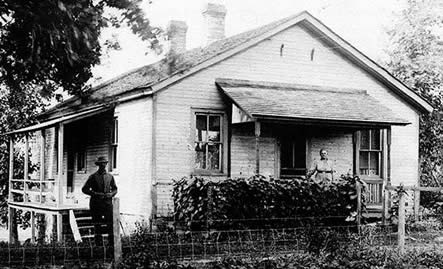 The cooperage building is 24 feet wide and 40 feet long and rests on a limestone foundation. Its build date was determined by means of dendrochronology, a process involving the study of a tree’s growth rings. A section of one of the log floor joists—still with its bark intact—was professionally evaluated and found to have been cut down in 1848. As was the custom of the time, such logs were put in place soon after being felled rather than being seasoned for drying purposes. Thus it is estimated that construction on the building took place in 1848.

Using logic and studying the building’s design, it is believed that the basement was used to construct the barrels while the second floor functioned as a storage area for them. During the renovation process, it was concluded that that main floor was completely open with no supporting beams

From Cooperage to Family Home

1/12th scale model was constructed and donated to Friends of Beckman Mill by Steve Mann of Manitowoc, WI.

When August Beckmann purchased the mill in 1882 it is said that there was no miller’s residence on the property. To remedy that situation, the coooperage was converted into living quarters for the family. While the work was being done, the Beckmanns took up temporary residence in the mill.

In addition to barrel manufacturing and serving as a residence, the building had other uses as well. Charlie Beckman stated that dances were held there and that it was once a general store.

At present, the cooperage functions as a meeting hall and display area with the basement being used for storage. Plans call for the structure to serve as an interpretive museum with provisions for holding meetings. On display now is a 1/12th scale model of the Beckman home depicting its appearance when the Beckmans were living there.